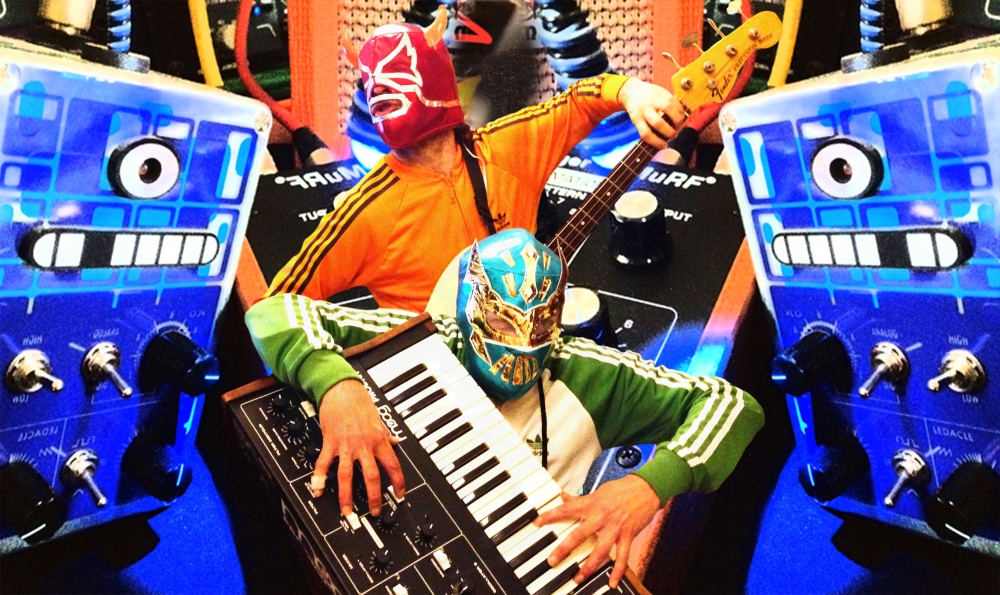 Formed in 2014 by Sonic Abuser and JC9000, Revenge of Calculon spent most of the year coming up with the highly complicated visual concept of  Luchador Masks and Tracksuits and working on their Debut CD/EP Noise Candy which was self released during that summer and was accompanied with a Ltd edition pink 7”.

This was followed by their first adventures into the real world with a string of gigs in their home town of Nottingham that included dancing the Robot and thrashing out heavy electro-funk sets at the infamous Hockley Hustle festival and Light Night festival.
In an attempt to spread the word of Calculon further afield they hopped on a plane and headed North to play at the Iceland Airwaves music festival in Reykjavik.
Having triumphed in the land of the ice and snow they set about organising a music video to be directed by Tom Walsh. The video was shot in January 2015 at Giltbrooke studios in Nottingham and features Sonic Abuser and JC9000 grooving around in front of six foot high programmable LED panels.

Later in 2015 they played at Cargo as part of Hack The Planet at Digital Shoreditch festival and hooked up with Hackers film composer Simon Boswell to work on a track for the Hack the Planet VR app for Google cardboard. The band performed a special live show with Simon at Comic Con London at ExCel to Launch the App.

2016 saw the creation of their double-single Dirty Beast and Meltdown, again on lurid coloured 7”s which were released during a sleazy launch party at Rough Trade record store in Nottingham.
After another summer of festival excess, it was time to journey to Reykjavik once again for Iceland Airwaves and a whole bunch of Nordic adventures that will be released on film later this year.

2017 so far?
In February Revenge of Calculon released their first ever collaboration single Atari-Safari (on translucent green 7”) which features infamous Nottingham rapper and champion beatboxer MotorMouf.
Word is that a new music video is currently in the making and features JC9000 and Sonic Abuser eating hotdogs whilst driving around in a 1970 Dodge Challenger.

Listen to them here!

Chosen by Suzanne Bull, Attitude is Everything